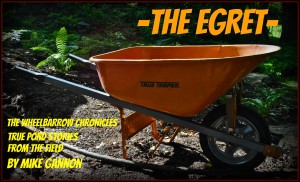 Just when I thought everything was cool with the pond…

The activity levels of the Great Blue Herons in my area had slowed down. I went ahead and took off the netting that I keep on my pond while the herons are in heavy stalking mode. I unplugged the talk radio station I play by my pond when I’m not there, so the heron stays away from human voices by the pond. I stopped moving the fake (super way too fake doesn’t fool a real heron for a moment, but it makes ME feel good) plastic Blue Heron around my pond and gave it the final spot for the rest of the season.

Sure enough, the Blue Herons were not giving me any issues; but a new threat from the sky was circling over my pond and I had no idea.

Looking out my kitchen window at my pond in the later morning hours I saw a strikingly beautiful large bird. It had pure white feathers, not one out of place; long black legs, large creamy yellow colored beak like a Blue Heron, and about the same height. For the first split second my thoughts went to how beautiful this bird is, I had never seen one so close, then my thoughts went to the fact that this bird was not here to use the bird bath, grab some seed, and chirp out a tune for me; it was here to visit what it surely thought was the neighborhood sushi bar. The moment I flinched to run out and scare the bird away, it noticed my movement and was gone in a flash. I had never seen this bird at my pond before, nor had any reports from the many ponds that I deal with about a bird like this visiting.

The bird was a Great Egret (Ardea albus), a bird I am much more used to seeing around larger natural ponds and closer to salty marshy areas and water ways foraging for frogs, snakes, insects, fish, crayfish, and all types of other critters. This Great Egret was pretty ambitious hunting at my pond; it was going for the big prizes. Even though it’s natural range in the U.S. is along the entire Atlantic coast and southern coastal states, when this Great Egret flew off it only did so to circle right back to my pond minutes later. Interestingly the Egret used the exact same escape route that the Blue Heron typically does so I made mental note of that. Now under the spell of avian paranoia I checked out my window again to now see the bird on my patio! Unbelievable! 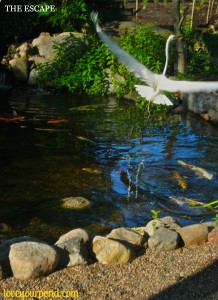 This time I got stealth, grabbed my camera, and army crawled across my sunroom floor positioning myself to get some photos and was able to grab several good shots. The Egret walked the edge of my pond with purpose, stepped into the pond with its back to me like he owned the joint, and began the stalking of my koi, MY KOI. My koi, who I thought would have an automatic flight and hide response to this huge bird, actually swam right up to the Egret! Either my fish are dumb with no concept of “stranger danger”, or life ain’t so great in my pond and the fishy death wish had finally been granted by the powers that be. I prefer to think dumb.

Seeing my fish welcoming this Egret with smiles and open arms made me flinch again and the Egret was gone, but not before I captured another shot of him taking flight. This time the Egret saw that I was only about 3 spine chilling feet away from him with just a thin pane of glass separating us. I figured the Egret must have realized that this great new spot he found was not a friendly place; and of course would not bother here again. But not so…

Minutes later, under my arbor on the far side of the pond where I sit to feed my smart well-adjusted koi fish, stood the frikkin Egret. In less than an hour a 3rd visit! Having dealt with numerous Heron visits I have learned to think like a bird and I know which areas of the pond trip up the big birds and the egret was right in the middle of the worst spot it could have chosen. In front of it was pond and aquatic plants and me; to it’s left the waterfall and a thick wisteria canopy which blocked a take off, to the Egret’s right more wisteria coverage and a good size Japanese maple; leaving the only escape route behind it or in front of it. Escape to the front is not a choice it would make; and escape to the rear would not be lighting quick since it had to pass back through the arbor and clear itself of the overhanging wisteria coverage.

My strategy was to let the Egret feel comfortable and get as close to pond edge as possible while I watched from inside the sunroom within an arms reach to the door that leads to the patio by the pond. It did not take long for the Egret to get comfortable because ALL of my dumb@$$ koi swam right up to it… again! It was quite the reunion, and the Egret was warmly welcomed to the pond/sushi bar. So while the Egret more or less was able to practically interview and hand pick which one of my oh so friendly koi to swallow whole, I took that as my cue to burst out of the door. Within 1.7 seconds I was on the gravel patio, to the Egret’s surprise. The Egret had a decision to make, and went where I knew he would; back out of the arbor, which was exactly where I was heading. Within 2.5 seconds I was within 6 feet of this awesome bird and the bird was not quite out of the arbor yet and clear for flight. I could see the panic in its eyes. Within 4 seconds I was within reach of this bird, and also at 4 seconds the bird had lift off. At 4.8 seconds the Egret had made some distance and altitude. AT 5 seconds I lost altitude falling to the ground out of breath and coughing, completely exhausted, seeing stars. I honestly don’t know what I would have done with the Egret had I actually caught it, apart from possibly losing an eye. At least I knew that this Egret got the message that he is not welcome at my pond! And return that day, he did not.

The Egret was definitely a much more persistent and aggressive predator than my experiences with the Blue Heron. Egrets have been described as fearless. The Great Egret is still a protected bird and was once almost hunted into extinction in the 1800’s for the collection of it’s plumage which was very popular in women’s fashionable clothing and accessories. At times the plumage was worth twice it’s weight in gold! The massive killing off of these birds led to early activist movements for protection of species. Ardea albus eventually became the symbol for the National Audobon Society, who was an e 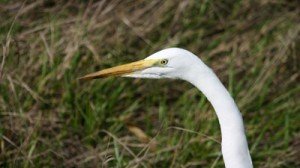 arly leader in those movements.

The Great Egret as we call it has also been called a Great White Heron, American Egret, and Angel Bird. It has an almost 5’ wing span and stands about 4’ tall. It’s call is more of a disturbing croak than anything pretty, and when in flight it can be recognized by the “s” shape that it holds its neck. It is now found all over the world again. Egrets nest in trees, and the chicks will often kill off nest mates before even leaving the nest; otherwise I’d probably have 5 or 6 Egrets to chase around my backyard, and no eyes.

As the Great Egret continues its comeback I am sure many koi pond owners will become more familiar with this stunning bird; as I had the fortune (?) to meet this bird. So now the ol’ pond net has been brought back out, and the outdoor radio is playing a local talk station to ensure the human voice is heard by my pond (which I think is very effective) by any predator that may be looking to make a meal out of my dumb stupid koi (whom I love). The best defense for your pond fish is getting to know these birds better and taking measures based upon that knowledge; also getting to know the behavior of your koi and pond fish better. The general assumption is that our fish are being chased down by these birds but the truth is that it is not just my fish that swim up to these birds; it is likely the behavior of your fish too. Our fish are social and curious, and don’t have much of that natural flight response to danger that their wild ancestors had. When our fish see something new in their environment, they will go to investigate. These large birds know this and that is why they wait at the edge of the pond, or go in as far as they dare to, then they sit….and …wait…because they KNOW that at some point a fish will come right up to them and BAM! Your lovely koi become a meal. Then the other fish realize someone is gone and they go to investigate and BAM! Then another, and you get the picture.

So crank them radios, stretch those nets, string them fishing lines, and get in stealth mode so you too can follow my professional advice for deterring predators and burst out of your door yelling wildly with your hands flailing about in the air to keep them big birds away. This method does work at scaring off birds temporarily; but true predator deterrence must take place on many levels. You’ll find this method works well with scaring off neighbors and mailmen too. Tell them the LOVEYOURPOND blog sent you!

That’s a great story! But, no help to me. I have a resident great white egret hanging around my pond now. December 27. I don’t know much about “stalking seasons”. He, like the heron before him, just flew over, happened to look down and spotted the sushi bar! Every day he’s out there. I have 3 dogs but the darn bird is so quiet, they don’t even realize he’s there unless they happen to be looking. You say talk radio helps. OK. I can do that. I don’t have a net but I guess it’s time to look into that. I was hoping for some other suggestions on deterring him. He’s already gotten to 3 of my fish that I know of.

Predator deterrent systems are always a multi-level approach. There is no ONE things that really works so like you are doing, try multiple deterrents. Here are some other ideas to consider for deterrents https://fullserviceaquatics.com/koi-pond/heron-deterrents-for-your-koi-pond/ and thanks for the feedback! Mike