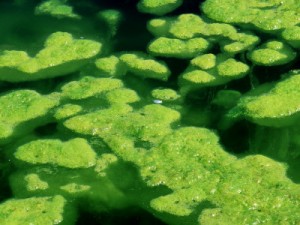 Barley Straw the newest old time remedy for algae control in modern ponds and water gardens!
Barley straw has gotten some good buzz in the pond industry the last few years as a natural remedy for algae control, but this “new” product actually has some history behind it, besides allowing us to enjoy frosty beers on the weekends! For hundreds of years barley straw has been in use as a method to control unwanted algae growth in ponds; and the roots of this type of use can be traced back to Europe when farming and agriculture was still how most made their livings. Did they ever envision that their methods would end up being used in modern day backyard ponds?
Farm ponds and ground water reservoirs in Europe, and elsewhere of course, could often develop problematic algae growths and the employment of barley straw to the water was a popular and effective way to control this unwanted algae growth for farmers. In its’ earliest uses barley straw would be bundled into bales and placed, mostly submerged, along the shoreline of ponds on the upwind side of the pond. As the barley straw broke down the wind would help to distribute the “algae treatment”. Later, and currently, the barley straw would be placed inside of netting tethered with a float to allow water to flow through it without being completely submerged.
What would happen when these methods were used is that the partially submerged barley straw with exposure to moisture and oxygen, would decompose (rots!). During decomposition, chemical compounds are released into the water; these compounds can greatly inhibit algae growth of filamentous and other forms of algae that commonly occur in ponds. For the traditional use of barley straw applications it can take from 2 weeks to 6 weeks for the decomposition to occur depending on factors such as water temperature, oxygen levels, and water movement. Some additional but often overlooked benefits of barley straw may include: long term algae control as the barley slowly breaks down, non-chemical treatment with no documented negative effect to fish, water fowl, or humans, improved gill function with many fish, increased invertebrate population which provides a food source for fish.
For our modern day ponds it is considerably easier for the pond owner to enjoy the benefits of barley straw and it is pretty unlikely that a modern pond owner will ever have to lug a bale of barley straw around. These days barley is readily available and can be found in prepackaged floating mini bales for ponds, it can be found in pelleted form, and even a liquid barley straw extract has made it convenient and affordable for the pond owner to control their algae without expensive chemicals. Nowadays barley straw treatments can be found at most pond retail stores or online pond retailers.
From my personal experiences with barley straw I have had mixed results with the floating bundles and pelleted forms of barley straw, they both are more sensitive to HOW they are used and placed in the pond. If they are not placed in just the right area they may not perform very well or not at all. I do really like the liquid extract and have seen good results. The liquid extract is also very easy to use as it comes in a pump dispenser bottle and has a good shelf life. I like to apply the liquid extract in the waterfall or skimmer area of my pond so it mixes quickly and evenly throughout the pond. When using the floating bales I like to keep them to the side of the pond, partially submerged, where there is decent water flow. Completely submerging the mini bales will reduce their effectiveness so avoid that temptation if you are trying to hide them from view in your pond. The pelleted form can be placed into a filter or skimmer when bagged, or spread into the body of the pond to break down.
The function of the barley is still the same, as is the goal in using it, but today’s consumer can get that “old time remedy” at just about any pond product store or online without cultivating acres of barley straw! Sometimes the old ways are still the best ways. Have you had any experiences with using barley straw? Let me know about it.
All copyrights to this material belong to Mike Gannon.

I’m probably gonna buy a bail, it will last me all summer & its super cheap… Love this blog, never knew that barley was actually so effective or how it worked. I also never imagined it was a benefit for fish!

Hi Mike,
Even tho its really cold here and in the 20’s , we are still getting sunny days and I noticed that we have a lot of green alge in the pond. should I put barley in the pond in the winter too.? i do it in the summer. I have a block of it in the shed i could use ???

Hey Elaine, we are thawing out a bit in these parts too! Spring is not too far off!

first time using Barley for my pond, how much would I put . In the center of my pond its 25 feet deep . any info would helpful Thanks

Hello Lupe, in what form do you plan to use the barley. I need a little more information to give you some advice. Thank you.