THE GOLDEN ORFE, AN AMAZING JOURNEY TO YOUR POND 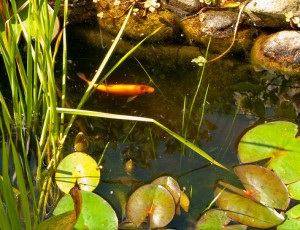 The Golden Orfe, or Ide, is a somewhat overlooked choice as a fish to stock your pond and water garden with these days; yet the Orfe is an easy to find and affordable pond and water garden fish. Most pond fish dealers stock the Golden Orfe because they know about its hardiness, interesting behavior, and easy upkeep when it comes to our backyard pond installations. The Golden Orfe, Leuciscus idus, has been in the United States for over 100 years now, originally introduced to stock estate and farm ponds. Their beauty was surely a consideration back then when stocking those early ponds; but their impact on insect control (water quality) was equally or more important. Now, they have found their way into today’s backyard designer ponds and water gardens, but this line of fish is a really old one. Leuciscus idus was described by Linnaeus himself, the “Father of Taxonomy” back in 1758! Keeping the Golden Orfe is like keeping a bit of pondy history. The native territory of the Orfe is in European and Asian rivers and large lakes, Russia to Mongolia.

The territory of the wild Orfe has spread worldwide and today the “domestic” Golden Orfe can be easily be found at most local pond and water garden retailers, and online sellers, but buying them in person is always more fun. The golden Orfe are a long and slender fish, but they are deep bodied. The Orfe can get pretty big too, at 20” or so and weighing in at 4 pounds. They are a very solid looking fish when mature. Their color is a golden orange mix, but I’ve seen them look yellowish, and even pale pink. They like to be in schools/shoals and are best displayed that way since they like to constantly swim just under the surface of the water. They move grouped together and rarely will break away solitary. Their natural diet is crustaceans, worms, snails, and even small fish; so they are considered predatory. However, the Golden Orfe that we keep in our ponds are well acclimated to taking prepared foods. This is not to say that instinct does not kick in if they are hungry, and just the right size little fish happens in front of them, and any insect landing in the pond does not have a chance. Give them treats of krill, or earthworms from time to time and they will love it.

Before koi hit the market, the Orfe and goldfish were battling for first place in the hearts of yesteryear’s pond keepers. Then koi came along and messed up their whole day; so the Orfe has been a little forgotten about by today’s pond keepers. Good news is that koi, goldfish, and Orfe can all stay in the same pond together. The Orfe is not an aggressive fish. They do like a lot of oxygen so a pond or water garden with a waterfall would be well suited for keeping them. Orfe will successfully spawn in our ponds and water gardens. Their courtship involves aggressive behavior which is normal; so if you see a lot of sudden chasing and splashing, that’s probably what’s going on. Aaah, romance in the pond (romance occurs intermittently, March thru June). Usually not that many baby Orfe actually make it, but year after year you’ll see more Orfe in your pond. Golden Orfe can live 20+ years in captivity. The Orfe is definitely better kept in larger ponds, 800 gallons+.

Everybody loves to tell a fish story and here is a fish that has a story built into it. Leuciscus idus, the Golden Orfe shares a long history with people who keep fish in ponds and water gardens…like you. Think about it, Carl Linnaeus himself, in a frenzy of scientifically describing everything within his reach; shoved his hand into the water, pulled out a Golden Orfe, and found it worthy of some of the earliest scientific descriptions of the animal kingdom. If you haven’t kept Orfe and you have the room in your pond, head out to your local pond and water garden fish retailer to find yourself a few. Tell them the LOVEYOURPOND BLOG sent you.

32 Comments on THE GOLDEN ORFE, AN AMAZING JOURNEY TO YOUR POND