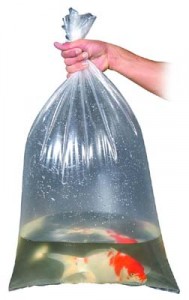 “Float the bag in the water for about 15 minutes and let them go.”
This could possible be the most widely and commonly distributed advice on acclimating fish to a new environment, that is out there. Often given out by the dog and cat food stock boy at “PETTHIS”; and boy is it wrong advice, yet believed by many to be a sensible approach to acclimating fish.
Perhaps even you, reading this, are saying “yeah, that sounds about right to acclimate my fish”. But let’s take a deeper look into acclimating fish, and why we acclimate fish to new environments.
The old “float the bag” advice would be one form of acclimating your fish to the water temperature of their new surroundings, and it works, but 15 minutes would probably just about allow the water inside the bag to reach temperature equilibrium with the water outside the bag, and the acclimation ends there! I suggest that 15 minutes is NOT enough time for temperature acclimation, an hour would be a better for temperature acclimation.
But why do so many us think that acclimation should just be for temperature? Isn’t there anything else that a fish should be prepared, or acclimated for? Yes, a lot more actually (ideally a quarantine should be done before entering any fish in to your general fish population so let’s assume for the sake of this article quarantine has been achieved).
First let me suggest a good method to start the acclimation process for your fish. Give yourself an hour at least for acclimating and more time for larger fish.
From moment of purchase get the pond fish to their intended new home as quickly as possible. Rinse the exterior of the bag the fish is in, pour off excess water from inside the bag leaving enough to comfortably cover the dorsal (back) fin of your fish, and place the bagged fish into the pond/aquarium. The bag should be kept open and folded back around the edges so it floats in the pond. At this point temperature acclimation begins.
After about 10 minutes of floating, you should start adding some of your pond/aquarium water to the bag with the goal being that within your given time period of an hour, or more, you will be tripling the volume of water in the bag from what you are starting out with (ex: start with 1 gallon end with 3 gallon). Water should be added to the bag about every 5 minutes, and this process completes the temperature acclimation, but really we are acclimating for so much more.
The acclimating process also helps acclimate your new fish on many different levels that we may not be considering, but are equally or more important than temperature acclimation. For example, lighting conditions, fish are very light sensitive and they should be given time to adjust to their new surroundings light levels. Sound levels are important, yes fish hear, and should be acclimated to the new sound levels (waterfalls, filters, etc) nice and slow before release.
The new fish population, a fish should be given time to see who is in the new environment with a protective barrier between them and the resident fish. Fish can tell a lot about the environment they are heading into when they are given the chance to safely observe who their new mates are going to be. Fish are not always “welcoming” to other fish and those fish who are not so accepting of others may even attack the bag the new fish is being acclimated in. This is good information for a fish to have before just getting dumped into a new environment and promptly attacked (can you say stress?)!
Overall water conditions such as pH, nutrient levels, oxygen content, salinity just to name a few, are very important for a fish to be acclimated into, slowly. Hormone and chemical (urine) messages given off by other fish can be acclimated to by the method of slowly adding water to the new fish bag. Fish are not complacent and when a new fish shows up they will express themselves via “chemical messages”, the equivalent of “butt sniffing” we often see dogs exhibit. Fish will also give off sounds such as barks, grunts, wines along with physical displays to show their rank and status in the pond, this time in the bag gives our new fish time to find out who is who in his new home so as to make a smooth transition.
With this to consider we can see how important acclimation is for a fish, but more importantly what we are really acclimating the fish too as well. So with your next addition to your pond/aquarium remember to take your time acclimating; it not only allows your fish a much better chance at a smooth transition into the new fish population (although fish will be fish!), but also gives you a bit more time to enjoy the experience of building your fish population!

My child came home with 8 goldfish from a county fair. I agree with your acclamation process. I know I will need to get more equipment… In the mean time, I have 2 one gallon tanks I can split them into and do complete water changes everyday until I get them in a tank with a filter. Some of the fish have black spot ammonia burns. I plan to put them in one tank and the more healthy looking fish in the other tank. My other option is to put them all in a 5 gallon tank and get a filter tomorrow. Any suggestions?

Hello Sandy. It sounds like you are on the right track! Enjoy! -Mike

I understand the process of acclimation explained above. However, a lot of people will have a counter argument I.e. the closed bag as collected a lot of ammonia and co2 and there is at a certain ph under which the ammonia is not dangerous. Opening the bag and floating it can cause huge change in PH at which the ammonia can be very dangerous .

How can you avoid this ?
Regards,

Hello Sohail, Thanks for reaching out. There are many subtleties and variables when it comes to the process of acclimation. I suggest using the information from the post in a general sense of how to acclimate. I do not have a suggested approach regarding your particular circumstance you described, and would need more information to attempt an answer for you. How will opening and floating a bag create a huge change in pH? I have never experienced this and don’t see the correlation you are suggesting. Thanks!! -Mike