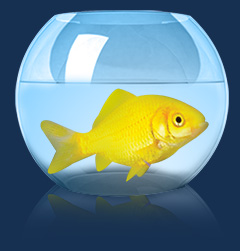 The common goldfish has been a staple of modern fish keeping drawing countless thousands perhaps millions into the hobby, and why not, with their bright colors and engaging demeanor they easily capture the hearts of fish keepers. When most fish keepers make that decision to keep classic goldfish they may not be aware of the ancient lineage that they are getting involved with. Goldfish have their roots set far back in antiquity. Goldfish, originally raised as a food fish, and originally more of a grey/green color have been documented for thousands of years now. The first mention of the “GOLD”fish makes its appearance in ancient Chinese texts from the Jin Dynasty between the years of 260 – 400 a.d.

Goldfish from ancient times of course exhibited many color morphs such as gold, red, white, and even yellow. The keeping of goldfish was not an activity for common people and was only enjoyed by the aristocratic level of society. The keeping of the “yellow” goldfish was highly illegal being that yellow was the color of the ruling families. By the 1600’s being punished for keeping a certain color fish had relaxed a quite a bit. At this time the goldfish was introduced to southern Europe becoming wildy popular, and was even used as a traditional 1 year anniversary gift, later replaced by paper (boooring!). The popularity of the gold and red colored goldfish exploded at this time, and the yellow goldfish went below radar.

Recently the yellow goldfish has made a come back in popularity, gaining common names of Canary goldfish or Lemon goldfish. The refreshed interest in yellow goldfish may even be helping to save the goldfish hobby which has been in a slow decline over the last several decades with competition from other aquarium fish such as marine varieties, and invertebrate aquariums; not too mention the “damage” that koi have done as koi popularity steadily rises for pond keepers who at one time would have never thought twice about whether they will keep goldfish or not, of course they would have!

The first thing one notices about the Canary yellow goldfish is of course its bright beautiful true yellow coloration, but wait…there’s more! The yellow goldfish really stands out against any other color variety of goldfish and even holds up its visual interest against the increasingly popular koi. Secondly, the yellow goldfish has the same great qualities as the common goldfish. Yellow goldfish are very hardy and easy to care for, perfectly suitable for indoor or outdoor fish keeping, with an ideal water temperature around 70F. Also, the yellow goldfish accepts the same wide variety of foods that any other goldfish would accept, prepared flake and pellet foods are readily accepted along with treats like fresh peas and various salad greens. The yellow variety mixes well with all other variety of goldfish including some of the more exotic strains, and is a classic schooling fish preferring to be in large groups. Lastly, they become mature at about 1 year, and have a life expectancy of 20+ years; with some goldfish attaining 40+ years in captivity.

I would MUCH rather get a yellow goldfish for my one year anniversary over paper anyday. Not sure my girl would agree.
Anyway, personally I think yellow is one of the most amazing colors for any fish really. Sure we have all seen stunning blues and other shades but just something about the yellows…

Yes there is something about the yellows! …of all species!

Thank you Mark! I think the Yellow goldfish needs more attention, they are very eye catching fish for a pond or water garden, or aquarium for that matter! See you soon. Cheers, Mike

It’s probably for the best that we no longer give goldfish as one year anniversary gifts.

Or maybe a goldfish could be the key to happiness!

I’ve seen the yellow color in six different varieties of goldfish. I have several yellow wakin. I’ve been planning on migrating the yellow gene to other varieties of goldfish I was planning on crossing a yellow wakin with a red/white ryukin and then breeding the F1 generation to itself. I just finished Joseph Smartt’s book on goldfish genetics and have ended up with only more questions. Is the yellow color just orange with the red being suppressed by a gene or allele? Will the yellow color fade to another color as the fish gets older like black moors loosing their melanin and ending up bronze? Are there different versions of the expression of yellow? How do you breed for yellow? Goldfish are tetraploid, should I change my approach to breeding or stay with the basic selective breeding? If anyone gets a line on where I can purchase yellow fish, or anyone gets info on breeding techniques please drop me a line at glenndalton707@yahoo.com

Hey Glenn, thanks for reaching out. I think you have much more expertise than myself in breeding of goldfish, since I have never bred them personally! Please keep us up to date on how you do! Thanks for contributing! Mike

I have a large Canary Yellow (9″ long, maybe 3/4 lb). The reason I mention the size is that she is now almost entirely silver, ( apart from a yellow band from the dorsal fin to the mouth), whereas when she was smaller it was bright yellow. The change has been gradual and there are no health problems, so am I ok to assume she is going through a natural process. Her friends are a similarly sized male comet-tail (deep orange) & a marginally smaller female shubunkin (spectacular red, white, blue, silver) both of whom have had no colour changes at all. The male comet, shows more interest in the shubunkin, and they have bred successfully several times over. When they first started showing signs of breeding a couple of years ago I put all 3 into a breeding tank, but the canary yellow isn’t interested, and in fact I usually put all 3 in the breeding tank, as I don’t want continual births, so I let them eat the eggs, before returning them home. (I have raised some fry – good health). Sorry about the waffle, I do go on a bit, I was just painting a picture – so is her colour change natural? Thank you

Hello Ian. Sounds like a lively pond you have! The color morphing of your fish would be pretty normal. Goldfish in general will morph throughout their lives very slowly with more accelerated color changing happening when very young and when older. -Mike

PLEASE HELP!!!There were some boys at my school who had 4 lltite goldfish in a bag from petsmart and they were going to throw them away because they had no way to care for them. So I took them but I’m not quite sure how to care for them. The largest fish is an inch long. I don’t have an aquarium and my mom doesn’t want to buy one. On my way home today, i’m going to buy aquarium rocks and some rock caves. I have a large vase thing in my kitchen that’s just there for decor and I was thinking of keeping them in there. How big of a bowl should i have for them? How often do i feed them? How often do i clean the bowl? Please help me. I want them to be ok. thanks

I will suggest investing in a 10 gallon tank, they can be found at Petsmart, etc for very inexpensive, or for free through “want ads”/craigslist. That would be the minimum I’d start with. Mike

I just want yellowgold fishes 4 and one black gold fish