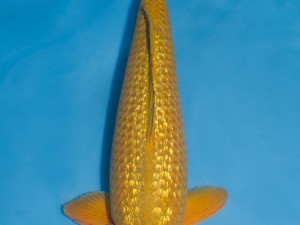 If there is a koi that could have “jazz hands”, the Gin Rin koi would have to be the one. It’s flashy and glitzy. Some Gin Rin have more sparkle than Michael Jackson’s right hand glove (or left hand glove, I’m not really sure). The Gin Rin variety is a star among the koi world.

But koi cannot have jazz hands, and I don’t think that anything is more sparkly than Michael Jackson’s glove; so I hope you get the point I’m trying to make. The Gin Rin type of koi is easily recognizable because of its characteristic sparkling scales, and it is easy to remember because of its easy name Gin Rin, which is actually pronounced “geen deen”. Gin Rin characteristics can happen in many varieties of koi.

This sparkling effect is strongest on young koi and will often fade away as the koi ages because of the way the scales of the fish age. Scales get thicker on older and larger koi and the sparkling effect becomes less visible. The name Gin Rin means “silver scale” and it is easy to understand why because of how this scale type reflects sunlight. Like many characteristics of koi and ornamental fish, the Gin Rin scale type is actually a deformity of the fish scale that has been bred into the fish. There are 4 sub-types of Gin Rin scale patterns with some more desirable than others.

The Gin Rin koi was developed by Mr. Eizaburo Hoshino. Mr. Hoshino was a well known Japanese koi breeder in the early 1900’s. It’s said that in 1929, Mr. Hoshino came across a fisherman who had caught a wild magoi that had many glittering scales. That fish was used as the genesis in the development of what we now know as the Gin Rin trait. Intense work by several early koi breeders in Hiroshima and Niigata Japan fixed this trait into Gin Rin koi and also developed the 4 different sub-types of scalation by around 1950.

These days just about every variety of koi has a Gin Rin type and there are even official judging standards for this trait. To be considered a Gin Rin koi, the koi must have at least 3 complete rows of Gin Rin scales. The fish which has the Gin Rin trait must first specifically qualify as its base variety. For example, a Kohaku must show all the characteristics of a show quality Kohaku before the Gin Rin trait is judged.

As far as keeping a Gin Rin koi there are no special requirements. They can be treated just like any other koi type as far as feeding, temperament, and longevity. Many hobbyists report that they do not grow as large as other koi, but truly large koi size is not very common in a typical backyard koi pond so the average hobbyist will not even notice! The Gin Rin koi is a lot of fun to have as part of a koi collection and adds that sparkle that really catches the eye. They are widely available from breeders and dealers. So pick your favorite variety of koi and look around for them with that classic Gin Rin sparkle and your pond will shine!