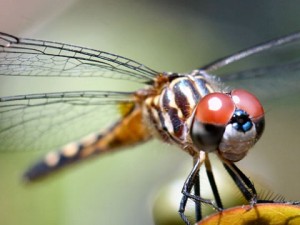 I have frequent visitors to my New Jersey pond, dragonflies. I have always enjoyed the dragonfly and appreciated its unusual shape, wing design, and colors. It is an easy way to lose a few minutes of time watching the dragonfly go through its aerial acrobatics just above the surface of my pond. I get comfort knowing that the dragonfly is going to make a quick meal out of any annoying pest, like mosquitoes, that may be visiting my yard too. For me the dragonfly is a welcome site for my New Jersey water garden installation.
As with many things that have appeal to me, I always want to know a bit more so as usual I do a bit of research on things I like. I found some cool facts about dragonflies that I was not aware of, and confirmed some things I am aware of like the fact that the dragonfly is not actually a fly at all and that they have been around for a good 300 million years or so, give or take a decade. They pose absolutely no harm to humans and do not bite or sting, and their main food as an adult is the mosquito (YES!!), and they add tremendously to the ambience of a pond installation.
What I didn’t know is more: the dragonfly larvae, an aquatic insect, can spend up to 3 years in the water before its metamorphosis into the adult stage. The larvae are highly predatory, like the adult, and the larvae can actually capture and eat small fish. The dragonflies’ range is worldwide and more than 400 species exist, the largest found in Costa Rica with a 7” wing span, and in fossil records dragonflies have been found with 3 foot wing spans! Dragonflies can fly almost 30 mph hour, and their large eyes allow them to see almost 360 degrees, and they will patrol as high as tree tops to find their yummy meals. The male dragonfly is highly territorial and often when you see those 2 cute dragonflies “playing” with each other by your pond, it is actually a life or death struggle for the 2 males. Sad to learn is the hard fact that when you see an adult dragonfly it is in its final stage of life, and that final stage is only about a 3 week period.
So as you site by enjoying your beautiful water garden installation, or pondless waterfall installation and those beautiful dragonflies are lighting from plant to plant scouring the surface of your water, enjoy them, take a picture, as they will not be by your pond for long!

Hey Mike, I´m Danny, from Spain, remember me??? I´ve been very interested in dragonflies lately, for these past two weeks it´s been fascinating to see, every morning, several new young dragonflies coming out of my pond.
I could see in the evenings, that the “exosqueletons” of the larvae, were resting out of the water, hanging on to the leaves of my plants that come out from the water, but the dragonflies were already gone, of course… But in the morning, when I go to work, I came to visit the pond, and saw that those young dragonflies, “reborn” during the night, and spend some time in the morning, waiting to get used to their “new environment”.
Something happened one of these mornings… I came to visit it again, and saw one of them, resting, getting used to it, in one the leaves… and my cat, Kima, she appeared out of the house, and came to the pond, for she loves it, the little fish (Gambussia), touching the water, and drinking it… anyway… she saw the dragonfly and tried to haunt it… I wouldn´t let her, of course, so what I did… was to take the little dragonfy in my hands, away from her… and wanted to put it safely up un a tree some feet from the ground so Kima wouldn´t reach that height. And what happened next, was so exciting…. Before I could put the dragonfly in the tree… just a few inches from it…. IT FLEW AWAY…. it was SO EXCITING….

Anyway… I wanted to share this with you… and let you know that i haven´t redisigned my old pond into one with the rockwork (the one of the dragonfly has it now, i guess it is better for them and any other critter of the pond, and i like it more now) but I will do it in time, and, as i told you, i will show you some pics when it´s done….

Anyway Mike, take care… and hope everything is ok there!!!

If any other pond lover reads this…. i hope you like it too.
Farewell!!!

That’s great story Danny. Nice to hear from you again. I will be looking forward to your project whenever you get to it! Thanks and take care. Mike

Thank you for this info. What month or time of year do you see adult dragonflies?

Hi Christy, the adult dragonfly is seen from late April thru October in colder areas. In warmer climates they will be seen year round. thanks for checking out the blog!!

That’s correct Mike, in Monterrey Mexico, Dragonflies are flying all year round!!! It’s very pleasant to know that the environment we’ve created (yours, mine, everybody’s pond) is returning something we’ve taken from Earth… natural spaces and natural life!!!

I am Irfan from India. Recently I have observed an interesting thing about dragonflies but could not understand the phenomenon hope you could help me. Yesterday when I was observing fishes in a pond I saw a dragonfly bouncing on the water surface for a long time. I thought it is just playing but after some time another dragonfly started bouncing at a different place. And moreover, there is a simple object like a twig on which they are bouncing. Is there any possibility that they are playing with their shadows or some other explanation for this. Thanks in advance

Hello Irfan. Thank you for reaching out from India! I would probably say that the dragonflies are feeding. Dragonfly can and will eat small fish, perhaps there were baby fish at the surface or some sort of larvae at the surface of the water. I can only guess, but that would be my guess since dragonfly are not very playful!! -Mike