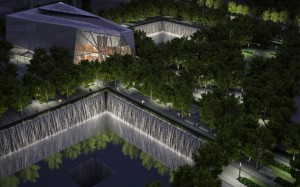 When considering water, one can spend countless hours trying to define what water is, what water does, or what water means. For many water might be what they wash their car with, others would say it is how they feed their villages; while others will tell you about how water heals them.

On September 11, 2001 the people of an entire nation, and to one degree or another; the people of the world community became victims of a brutal attack. This attack left in its wake destruction on a massive scale and the loss of thousands of lives in a most violent way. People from every walk of life were affected and a deep profound wound was thrust into the hearts and minds of millions of Americans. The road to healing was sure to be long and difficult, if possible at all.

The road to healing was also something that had to be built, literally. Those charged with the monumentous task of “how” to build that road of healing could not have possible known where to begin or what materials to use that could bring some peace and closure to those who needed it most. Words could not heal these wounds, actions of leaders could not either; the pain was too great. What began to emerge early in the healing process were memorials. At first the memorials were simple but fleeting groupings of candles and flags with hand written notes to loved ones lost. As these memorials washed away with the rains more permanent memorials sprang up built from the heap of steel and concrete salvaged from the site of the attack. This steel and concrete at one time were proud structures soaring into the sky, undeniable, and teeming with life energy. Pulling these materials from the wreckage and using them to build again was an incredibly powerful statement to the world and those who seek to destroy it; that we will build again, we will continue to live, and their attacks that were meant to cripple and destroy our minds and souls, were merely a set back for the spirit of the American people. For those who suffered direct losses of loved ones, these new memorials of steel and concrete gave hope and sent a message that their loved ones will always be remembered. These memorials gave some light and some lift to what those directly affected must endure the rest of their days.

These 911 memorials provided some relief, but as one takes them in and experiences them, the steel and concrete did not bring that sense of healing that was almost desperately needed. That type of healing needs time, lots of time, and the right material. Concrete and steel evoke the strength, fortitude, and perseverance that they are meant to. They are an important part of the message being sent to those who tried so hard to break us down, and failed; but the healing still needed to be addressed.

Ten years later on an important anniversary of the attacks that occurred; a permanent 911 Memorial Museum was unveiled and introduced to the world but more importantly to those Americans who still struggled to fine healing from what occurred on that terrible day when so much was lost. The material used for this memorial was not steel, concrete, or mountains of candles; it was water. Healing water; an undeniably fitting material to use; to not only memorialize those lost in the attacks, but to help heal those who were left to deal with the aftermath of such a tragedy. A more fitting memorial I cannot think of either. Those ten long years since the attack gave time to consider what would be the best way to send a message to those who wish destruction in the world and to help give healing and some closure to those who have long suffered since the attacks. Isn’t it interesting that water was the final choice?

The 911 Memorial Museum is now a 16 acre place of beauty and serenity built in a spirit of hope and renewal. This is a stark contrast to what was once an area of unthinkable death and destruction once called Ground Zero that led dark hearted people to dance in the streets. Now the 911 Memorial is a park like setting located in the footprint of where the Twin Towers that were knocked down once stood. Beautiful trees and plantings with 2 amazing twin water features at the heart of it all called the North Pool and the South Pool. The water features are stunningly beautiful, yet simply elegant in their design, with constantly flowing water over the largest man made waterfalls in North America. Each of the pools is about an acre in size. The North and South pools are the designated areas for the families of the attacks of September 11, 2001 and also the World Trade Center attack from 1993. At these pools they can locate the names of their lost loved ones inscribed along bronze panels that outline each of the pools. The entire area was designed with sustainability in mind as well. The 911 Memorial Museum campus was given careful consideration in all materials used from trees to walkways and the area has massive holding tanks for rainwater that will be harvested to replenish the pools, as well as irrigate the area. It is a stunning and amazing design chosen from over 5200 entries from designers and architects spanning the globe. The final design chosen was named “Reflective Absence” and while helping to wash away the terrible memories of these tragic events, it also is meant to allow us to NEVER FORGET.

It is no surprise to me that water shaping became the final choice to help those suffering to move forward. I have built on a much lesser scale waterfalls, ponds, and water gardens for my customers who wanted to create an intimate memorial to a loved one in their backyards. I see this as a fitting and beautiful way to remember loved ones lost and gone. As a water feature designer I take especially great pride in building a water feature as a memorial, and feel humbled to create such a tribute for my customers. When I saw the design for the 911 Memorial Museum I was very happy to know from personal experience that the designers had chosen the best material they could have possibly chosen to work with, and they built it sustainably to ensure it goes on for many future generations; only to become more beautiful with age.

The opening ceremony for the 911 Memorial Museum was on September 11, 2011 ten years after the attacks and it was a beautiful ceremony that shows the world that you cannot keep America down. They can tumble buildings but you cannot tumble our spirits. They can destroy concrete and steel, but you cannot and will not destroy our people. We have rebuilt what they felt was permanently destroyed. We are still here, stronger.

Great article Mike. Thanks for sharing.

Great article Mike. Thanks for sharing.