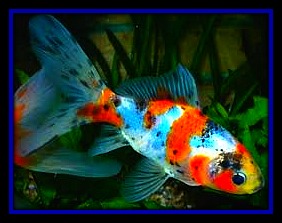 You say Shubunkin, I say Shuboykin

You say Shubumpkin, I Shubunkin

Let’s call it all the same… or are they?!

Shubunkin, the poor man’s koi, are beautiful and easy to care for calico goldfish. Shubunkin make a great choice for the backyard water garden pond adding color and liveliness to any setting. As a pond fish the shubunkin are cold hardy, can tolerate a wide spectrum of water conditions, accept many foods, and will reproduce pretty readily in a typical pond set up. They are available from most pond fish sellers; and with a reasonable price tag they have become a popular choice for water garden and pond owners.

Even though shubunkin (Carassuis auratus “auratus”) are nicknamed “poor man’s koi”; let’s face it, koi are a “hole nutha level” of fish. Koi have very distinctive patterns which will define what type of koi it is. What the shubunkin do share with koi are the nice colors, but with random speckled calico patterns of red, blue, copper, black, violet, yellow, orange, and white. Blue is the most desired background color with shubunkin aficionados. What shubunkin also share with koi is the high level of breeding standards among shubunkin breeders. Being a shubunkin enthusiast is practically a way of life. There are even competitions where members of various “societies” will show their fish for awards and ribbons for their prize shubunkin; much like those involved in “koi kichi societies”. 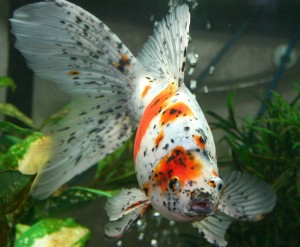 Attention to breeding standards has produced different types of shubunkin. According to body type, not color patterns, 3 distinct type of shubunkin have been produced. The Bristol Shubunkin, London Shubunkin, and American Shubunkin (also called the Japanese Shubunkin) make up these types. The London shubunkin could basically be described as a calico goldfish, with the same body shape as the common goldfish. The Bristol shubunkin has a more refined body shape and fins with richer colors and deeper blues and blacks. The American shubunkin has the classic shubunkin colors and markings but with a body shape more like the comet goldfish’s longer body and fins. The American shubunkin also drives a 1967 Mustang convertible and goes honky tonking on weekends, true.

If you are geek enough for this, the shubunkin have a multi-national cross-sectional background. According to fish history, the Chinese brought common goldfish to Japan. The Japanese developed calico goldfish from the common goldfish somewhere around 1900. Then some American breeders fixed the characteristics of the shubunkin. From there, the British developed the 3 shubunkin types. The British Aquarist’s Society (BAS) officially recognized the Bristol shubunkin in 1934, with the other types being recognized as developed. …no simple history to this fish.

HOW TO KEEP SHUBUNKIN:

Shubunkins are happy fast moving pond fish that get along fine with most other pond fish including koi, orfe, bitterling, and dace; but they may be too fast to be kept with highly ornamental goldfish. Shubunkin can live up to 20 years and grow to 15+ inches full size. Shubunkin have some transparent and pearly scales that catch and reflect light giving them a sparkle! Vegetable based pellets should be the staple of their varied diet, and feed the shunbunkin daily. They are very social and do best in groups, which is also the best way to display them. Then can thrive indoors in aquariums too, just give them big tanks.

The wide appeal of the shubunkin from the beginner fish keeper to the experienced fish keeper is easy to see. The ease of keeping and bright colors for the beginner, and the high breeding standards with the opportunity to claim top honors at fish competitions appeals to the experienced. The shubunkin has claimed its rightful spot among the favorite fish in the pond and water gardening world. It’s time for you to give them a try too.